I learned how to make ‘fake ice cubes’ by melting clear pony beads.
The tutorial I followed was on flickr.
Unfortunately that tutorial is now gone. However, I’ll look around and see if I can find another tutorial that is easy to follow… or I may make one myself. Either way, I’ll update this post in the future.

Have you ever made fake ice?
I hope you all Have a cool day!

The tutorial I used is now gone. But here are a few things I did that made the process easier.

There’s a few things I adjusted, added or did different.
*I used balsa wood to make my ice cube form.
*Keep the area well ventilated: I opened my windows and turned on ceiling fans and ran the stove-hood fan.
*Apparently my oven doesn’t heat as hot as the author of the tutorial’s does.
I had to bake at 400° to get the beads to melt successfully.
*I also had to bake them longer: I’d put half the beads in the form and bake them for 15 minutes then put the rest of the beads in and bake for another 15 minutes.
*Keep a close eye on these as they bake to make sure they don’t burn.
*Let the cubes cool before trying to unwrap the aluminum foil.
*To give the cubes a shiny finish, after I peeled the aluminum foil off my ice cubes, I trimmed off the shards and rough edges and then put the cubes back on the pan and in the oven for about 3 to 5 minutes.  I was careful to watch so they wouldn’t melt too much.
*I took them out of the oven and let them cool. 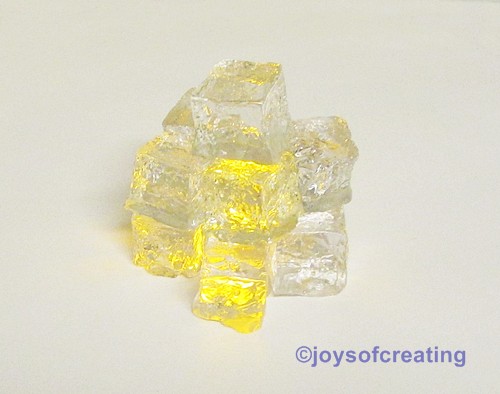 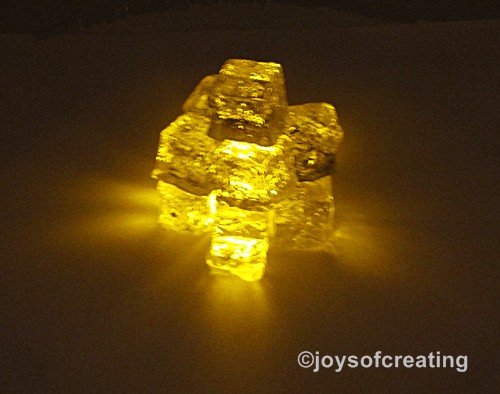 There’s a few tutorials on the web on how to make fake ice by melting beads in metal ice trays.

I apologize for the missing links to the tutorial.
I’ll try to do an update soon. with either my own tutorial or a link to one.

My hobby seems to be collecting hobbies and crafts. There's so many things to make and do that I can't focus on one single one for very long at a time. I blog to share my latest craft or thoughts with folks and hopefully get their thoughts and suggestions too. View All Posts