I was a teenager when I last knitted with needles. I made baby hats and booties that I sold in a thrift store. I liked knitting and wished I could have expanded my skill past a knit stitch. Knitting with needles took alot of coordination and talent to make really pretty stitch patterns and in my teen years I just wasn’t able to master it.
I took up crochet in the years that followed. Crochet was easier for me and I stuck with it. Then a few years ago I started loom knitting and that’s fun. Loom knitting doesn’t require the same amount of physical hand movement coordination. I’ve enjoyed using it to create many things.

There’s a project that I’ve been wanting to do for awhile; making 2 dishcloths, one by loom knitting and one by needle knitting and see how they compare. It took up until a couple weeks ago for me to get up the courage to try my hand at knitting with needles again. My Bff encouraged me and was convinced that I could do it.

I struggled to remember how to knit with needles. Then I went on that famous video site and refreshed my mind on the basics. I worked on my first knitting needle project attempt over and over, at least a dozen times. I’d knit and purl and miss a stitch or the yarn would slide off the rods or I’d drop the rods and then I’d unravel it, recast on and take off again. I did this for a couple of days. Then I finally got a bit better.
During my trial and error, I worked up a pattern for a dishcloth and finally needle knitted the dishcloth without missing a stitch.

I used size 7 knitting needles, they were the smallest size I have. I made up a pattern for a dishcloth for my Boye Sock Loom that is the same finished size as the needle-knitted one.
The stitch pattern I used for both needles and loom knit is what I call a ‘basket-weave’, I’ve heard it called a tile stitch, a cobblestone stitch  and I even heard it called a waffle stitch. I think, regardless of what you call it, as long as you’re enjoying creating with it, then that’s what matters most. 🙂

I used a knit & purl pattern for the knitting needle basket weave. For the loom knit basket weave I used Ewrap & Purl pattern. (Truth is, I was halfway through the loom knitted dishcloth before it occurred to me that ‘ewrap stitch’ isn’t the ‘knit stitch’.

I decided it didn’t make enough difference to matter, so I continued on.)

The Needle Knitted dishcloth is 6×6 squares. The Loom Knitted dishcloth is 7×7 squares. I had to make the loom knitted one a square more to get the two dishcloths to be close to the same size.
I used a ‘slip-stitch’ for the edges of the loom knitted dishcloth. It finishes off a project smoother and neater.
I’m not skilled enough at needle knitting to know a stitch to make a smooth edge, so I just carried the k,p pattern alternating out the 2 stitches for the edge. It’s not very neat and tidy, but it works-for-me. 😉

Both of the dishcloths are handy for washing dishes. I know some folks might think them small, but for me they’re the most comfortable size. 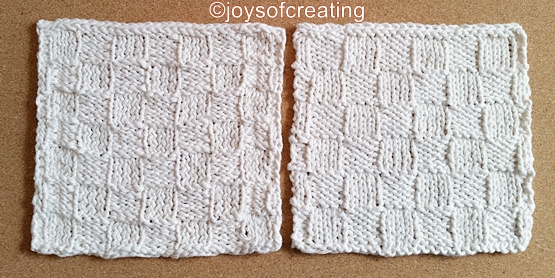 I’m happy that I relearned how to knit with needles. I may attempt to make another project in the future.

Wishing you all fun with whatever craft or project you’re doing or planning.