One of the fun things about yardening is that I never know what I’m going to encounter. Like today, I was digging in one of my flower beds to plant some marigolds. I was pulling the dirt in around the edge of the marigold, when I found an egg buried under a sweet william.

Cool, I physically laughed out loud. I walked across the yard where my husband was mowing and told him, “I need to show you something.”
He followed me to the flowerbed. He laughed and said, “Isn’t that something. I bet it’s a turtle egg.”

We both shared a laugh at the interesting things we find on our property.
I agreed with him about the turtle egg. We used to see turtles in our yard making nest. So far though, we’ve never seen a baby turtle.

I covered the egg back up with soil.  I hope that it may one day hatch out a turtle. Unfortunately, we’ve had more than a few freezing temperatures this past month. This egg is really close to the top of the soil so it may not be viable now.
Or it might be, we’ll see, time will surely tell.

Have a great rest of the week.
May all your surprises be fun ones.

edited in:
There may be more eggs. I stopped digging around as soon as I saw the egg.
Also, I’m just guessing it’s a turtle egg. I honestly don’t know what kind of egg it is.

The other day, My husband was trimming some bushes and trees at the edge of the woods. He called me outside to see something odd he found in the woods.
I never know what to expect when he calls me outside to see a new discovery. I make sure to grab my camera as I head out of the door.
I was surprised to see a pretty white egg. It’s the size of a regular chicken egg. How strange. It’s just sitting there as if a hen was passing by and laid her egg next to the rain lily. We figure it could have happened that way.

Not really wildlife, but I’m betting a critter had something to do with this mystery egg appearing in our woods. 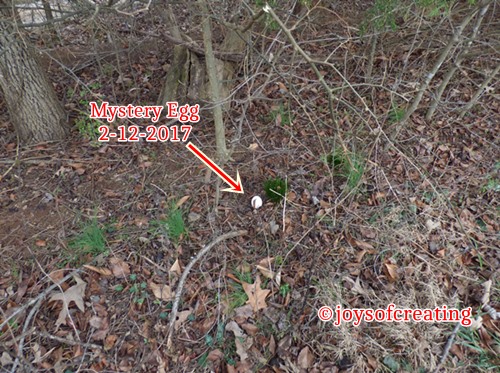 Wishing you all a whimsical Wednesday!

We’ve been watching this Turkey hen visit our yard and garden. We hoped that we’d get to see a flock of poults soon.   She has her nest in the woods or field a few acres away. 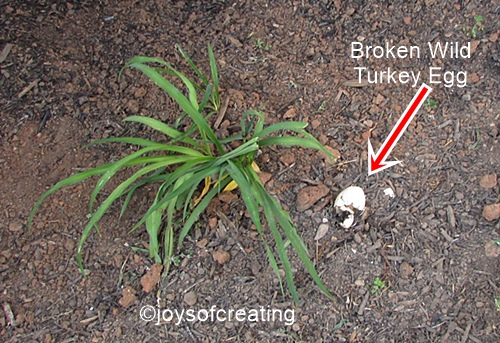 Unfortunately, we discovered a broken wild turkey egg next to one of our day-lilies. Some critter stole it from the turkey nest and was so desperate to escape the flogging Mama that it kept running for many acres until it got to our yard to eat it.

We feel so sad for the turkey hen. She must be heartbroken to lose the precious egg. Bless her heart.

We’re hoping some of the other eggs survive, otherwise there may not be any poults after all.

The circle-of-life can be quite disheartening.

Our 13 year old Grandson loves playing minecraft. I noticed the blocks on the game are simple designs (and to my creative mind, begged to be made out of plastic canvas lol) I created simple basic patterns and am pleased with how well they look.
I tried to make a Steve, but I wasn’t happy with the way his head turned out, so I didn’t make him a body. Grandson thinks Steve’s head looks okay and told me I should go ahead and make his body too. He said the game has floating heads in it, so even without a body, my Steve-head worked out okay.
It’s fun to be able to make a craft as an extension of a game or hobby that our Grandson enjoys.

One of the stocking-stuffers that our Grandson got at Christmas was an alien egg.  He had it sitting on a shelf  and decided to it was time to try it out. It’s about the size of a regular plastic Easter egg. The directions are, submerge the egg in water and leave it. After a few days it cracks open and an alien hatches out.
Unfortunately, after a few days, the egg had only started slightly cracking by the time it was for our Grandson to go home, so he took it with him.  I wonder how much longer it’ll take to hatch and what it’ll look like.  Grandson said he’ll try to take a photo of the alien for me to see what it looks like when it’s grown. 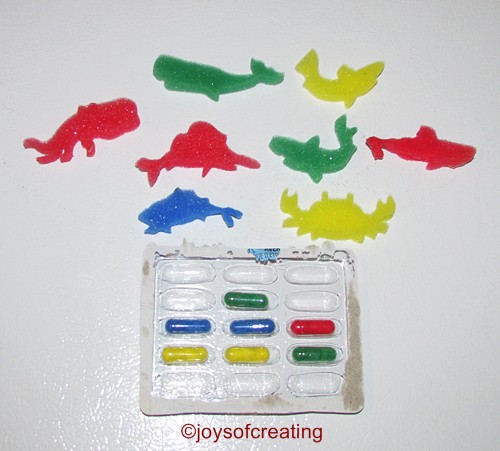 Grandson hatched out a bunch of sponge fish from capsules. 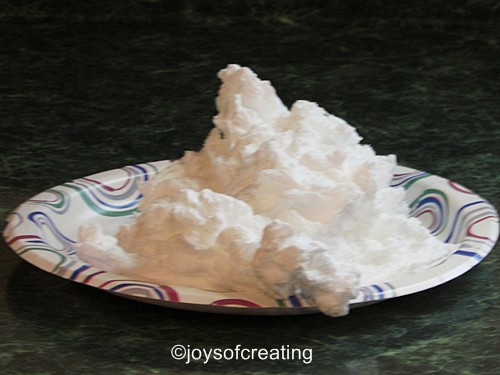 Grandson had a wonderful time doing an experiment of Ivory soap puffing up like a cloud when it’s put in the microwave. It was so fun to watch.

Grandson got creative and made himself a toy gun out of cardboard and masking tape. He made it so it has removable attachments and also the the slider thingy moves too. I think it’s quite clever and imaginative. 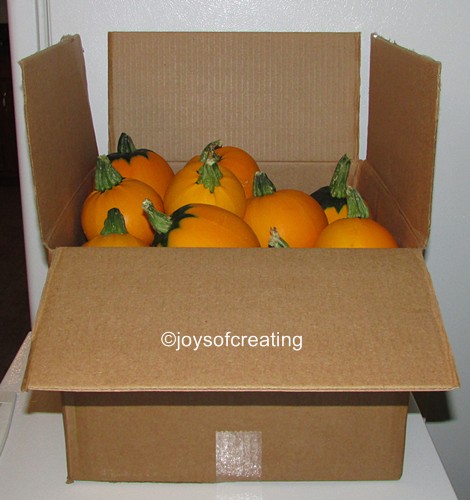 We gave a big box of 1 ball squash to our Grandson’s Mother & Maternal-Grandmother.
We still have oodles of squash left and more in the garden. I still have one counter full and my craft table is still full.
Grandson told me that I needed to grow something else in the garden besides squash. He thinks I over-done it. lol
I told him it’s not really my fault because I only have 7 plants and it’s been a really good year for squash. lol

Here’s wishing you all a creative rest of the week.
🙂