Yesterday evening I was de-beetling my roses when I found a swallowtail butterfly caterpillar on my yellow hybrid tea rose. 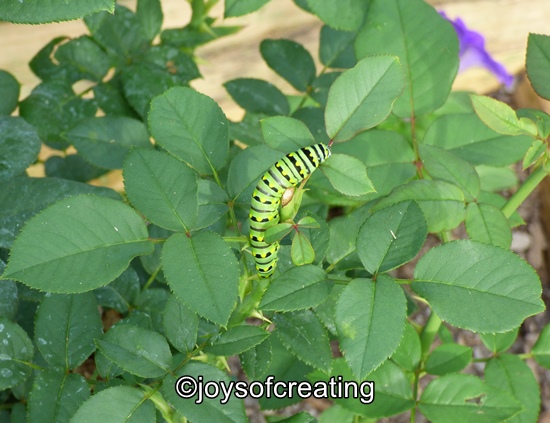 It wasn’t but a few minutes until I saw the caterpillar had left the fennel and ran up and across our wood fence. (sorry about the photo quality. The little guy was moving fast.) 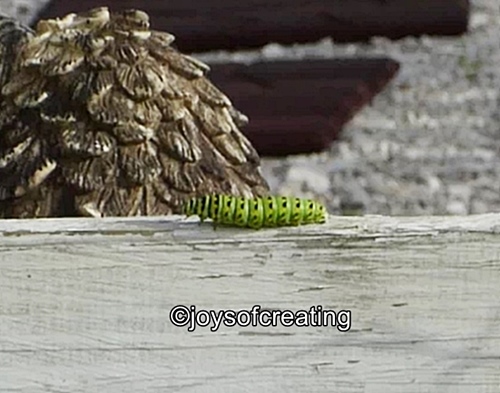 I had read that at a certain age these species of caterpillars roamed around before they go to the chrysalis stage. I thought this caterpillar was one step away from spinning silk, so my husband got a pear tree branch for it to climb on. I carefully picked up the caterpillar and put it on the limb. We hoped that it we would get to watch it spin silk and make it’s chrysalis. But it kept climbing out onto to the leaves for a long while and then it fell off onto the ground. 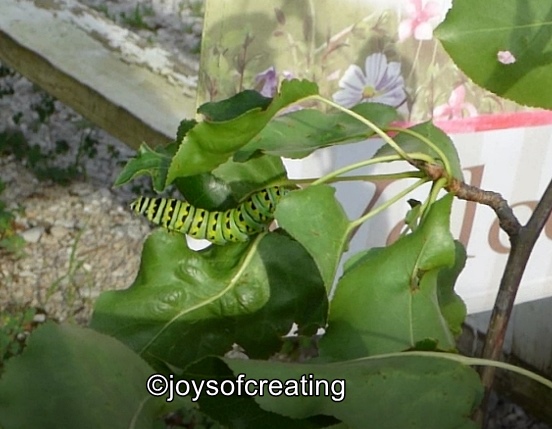 I watched it the whole time and was worried it would be eaten by a bird. So I got a small twig and let it climb up on it. It had become my mission to save this caterpillar (and watch it through it’s stages.) I’ve read and saw photos of how folks raise butterflies indoors, it seemed like a good idea. I decided to build the caterpillar a condo and bring it inside. I have an old aquarium that has cracks in it, that I didn’t have the heart to throw away. I’m always thinking there’s a craft I can use any old container for even one with cracks in it.

My husband liked the idea. He got a fresh small limb and trimmed the leaves off.  He put it in the aquarium. I put a glass ramekin with a bit of water so the fennel won’t die too quickly. We added the caterpillar and some fennel.

My husband thought the caterpillar might get lonely, so we went to the herb bed and got another caterpillar along with the fennel limb it was on.  Now we have 2 caterpillars as sort of indoor pets. I enjoy watching them wonder around the twigs and fennel. 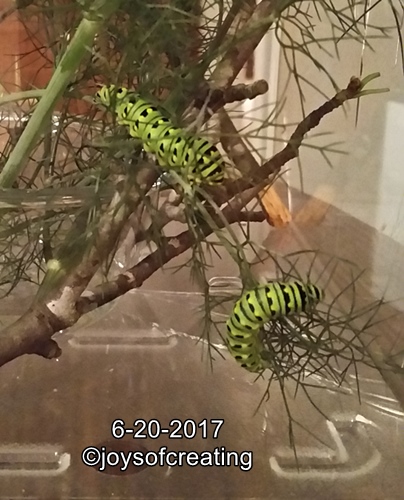 Hopefully, they’ll survive and make butterflies in a couple weeks or so.

Have you ever raised butterflies indoors?

Wishing you all beautiful days of flowers and butterflies.