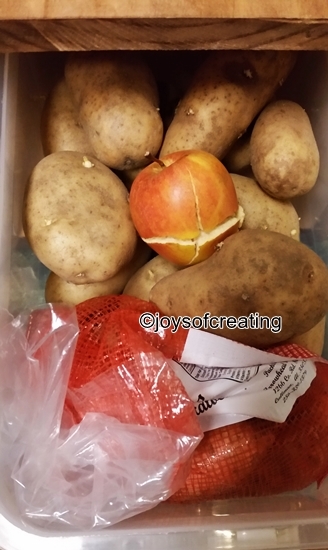 I’m one of those folks who believes that apples help keep potatoes from sprouting too quickly. The other day I opened my potato bin to get out some potatoes and was a bit surprised when I saw that the apple had burst open. I picked it up expecting it to be mushy or soft, but it was firmer than a fresh apple and had dried out in the open wound.

I don’t know what variety it was. We’d bought the apples at a small grocery store and didn’t keep the bag.
I tossed out the broken apple and put a new apple in the bin. I hope it doesn’t burst open too.

Over the years, I’ve kept different varieties of apples with my potatoes. They last a long time, after a few weeks I toss them next to the woods for whatever critter may want them. This strange apple bursting open is a first for me. I can’t figure out what happened to it. I think it’s just so odd.

I hope your day is a good one.