One of our yellow cherry tomatoes is ripening. It’s one of the vines we’re growing in a container on the back porch.
The tomatoes in the garden have babes on the vine, so hopefully we’ll have a few big tomatoes too.
Our chard is beautiful and delicious.
The onion bulbs are getting larger.
The squash and cucumbers vines are starting to bloom.
Something has been eating on the bean vines.
We found a baby bean on one of the luckier bean vines.
Our potato plants are big and healthy and new potatoes are cracking the ground at their base.
Last but not least our peppers are starting to produce. These are orange peppers and will take a many weeks to ripen fully… although they are quite edible at any stage of the growing/ripening time.
So despite our region having hot dry weather, our garden is doing well.
I hope all your gardens are productive. 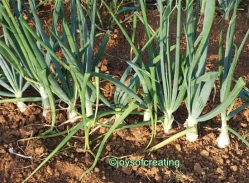 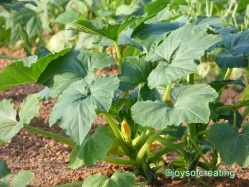 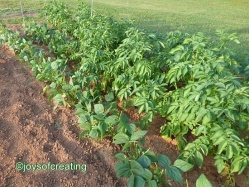 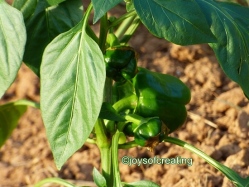 Wishing you all a wonderful weekend!

We finally got a mess of cucumbers, all-be-it they are rather dinky ones, but they are cucumbers none-the-less. Until recently, the deer kept the vines eaten back. We’ve kept an eye on the vines and as soon as these little ones plumped out, we picked them. Fresh cucumbers are a tasty side dish, in salads, a snack or even a sandwich.

The evil demon squash vine borers murdered my acorn squash vines and forced me to harvest them.
According to the information I’ve read, these acorn squash are ripe. I’m amazed since they should have had another month to go. However, I’m letting them set on the coounter awhile before I attempt to cook one. These are winter squash, so letting them set shouldn’t harm them.

I hope you all have a great week.

We got our first harvest of squash yesterday. We harvested some other veggies to go along with the squash for a stir fry. 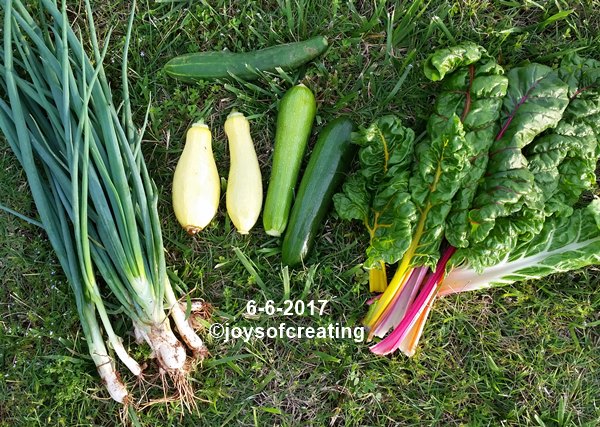 My squash plants are big and beautiful at the moment. The corn is growing tall and strong. The beans, well, they’re pretty much just rabbit food as you can kind of tell from the plants in front of the squash.

All-in-all, everything in the garden is growing well except for the beans. 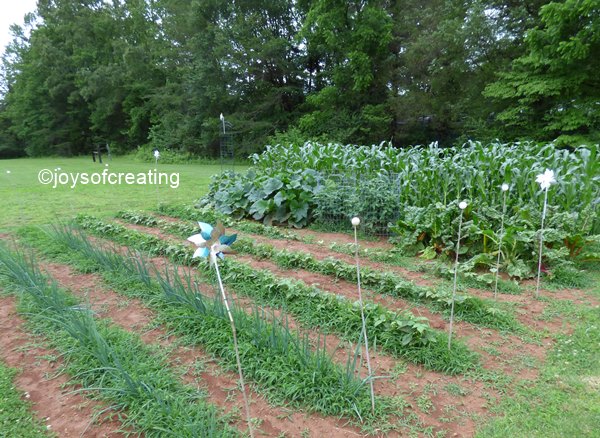 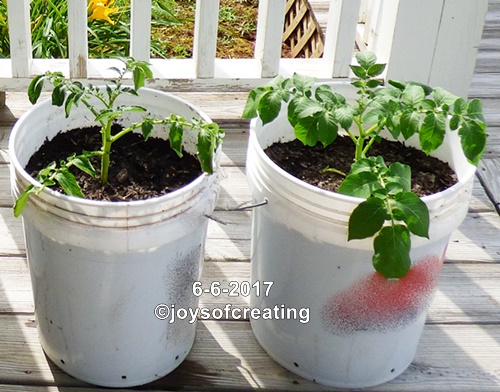 Wishing you all happy days for the rest of the week!

One of my potato plants grew tall enough to add more soil to the bucket. I may have went a bit over board with the soil. As you can see, I kept the plant a couple inches tall and buried the leaves, so maybe it’ll be okay. It’ll make me happy if I actually luck up and grow an edible potato or two in the buckets. 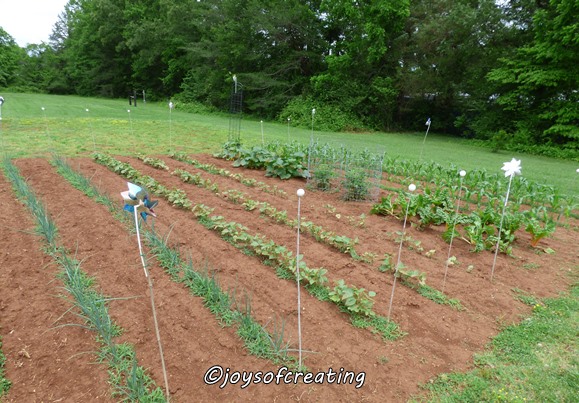 The garden is growing and doing well.
Except for our beans. The bunnies are eating the tops out of them. We figure the beans may still mature and produce as long as the plants have some leaves and are healthy.

Our squash is loaded with babies. It won’t be long until we have a nice fresh mess of straightneck squash. 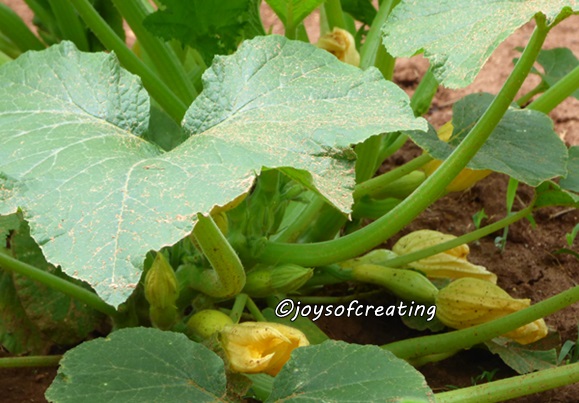 The cucumber vines are growing nicely and has a few blooms. We grow cucumbers for salads and to snack on. These few plants will produce enough for us for the summer. 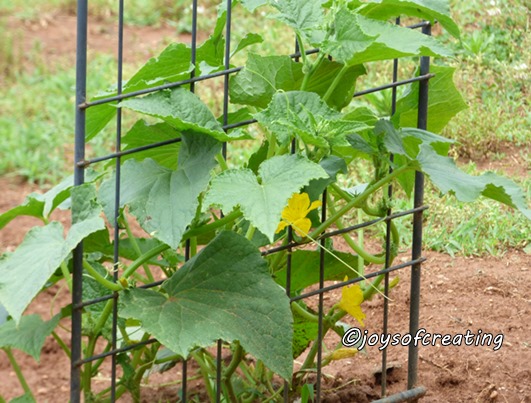 The corn looks good and is growing strong. We hope we’ll have enough corn to freeze several bags for the winter.

We’re happy with our little garden. It doesn’t require much attention (yet). We like having the more compact smaller garden.

~*~
It’s that special time of year for birds to nest. A couple of birds tried to build nests in our fans again on the back porch. My husband cleaned out the twigs and fluff. Thankfully there wasn’t an egg in the nesting. We now keep the fans running on low during the day to deter the birds from trying to build nests again.

~*~
I hope your plants and flowers are thriving and growing well.
Have a great week! 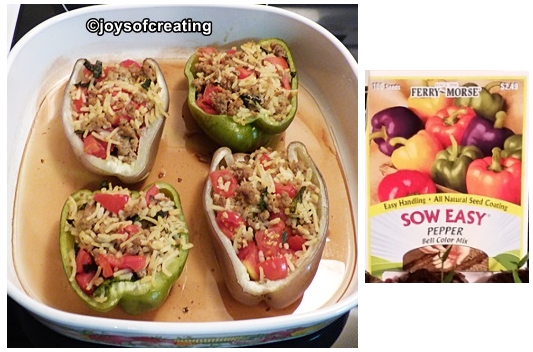 My blogging buddy Dianna mentioned in a comment on my pepper post that she used to make stuffed peppers.
I’d never made stuffed peppers and since I have oodles of them at the moment, I found a simple recipe and made some.
I used a green pepper and a purple pepper so we could compare their taste.
I served the stuffed peppers with a baked potato and cornbread. We really enjoyed it.
The purple pepper was really good. It had a nice smooth taste to it.
We didn’t care much for the green pepper, it had a harsh taste to it. The stuffing was good so we emptied the green pepper’s stuffing out on our plates and ate it that way.

I used a recipe for Broccoli and Rice Stuffed Peppers by Knorr
I made some changes and additions to it:
ground turkey instead of ground beef
chopped fresh tomatoes
chopped fresh basil
in the casserole dish bottom I put 1/2 tbsp Worcestershire sauce with 1/2 cup water.
After the peppers were done, we sprinkled them with the Worcestershire water
my husband topped his with mixed shredded cheese
I topped mine with ricotta and sour cream cheese
—————

My blogging buddy Sheryl posted on her blog about fried cucumbers. It sounded like something I’d be interested in trying except I would bake them. I peeled a cucumber, quartered it up, coated it in a bit of olive oil, coated it in crushed herbed croutons and grated parmesan cheese and added them to a tray of squash sticks prepared the same way.
The cucumbers had a nice texture and smelled great, but I think the taste would be described as an acquired one.
I think if I had of used the recipe on Sheryl’s post and deep fried the cucumbers they may have been more to our liking.
—————

We planted a pack of mixed color carrot seeds. So far only a few of the white ones have matured enough to pick. I topped them, washed them and scrapped the skins clean.
Well, the taste was really not very carroty. It was more like a big crunch with very little taste, for some reason it reminded me of a very bland radish.
—————

We harvested, shucked, cleaned, cooked and tried to eat some of the ornamental corn. We didn’t care for the plainness of the taste. I think if I had of add a lot of sugar to the water and it would have been better. It’s edible though and would be welcome if one was hungry.
Thankfully, we didn’t grow the ornamental corn to eat. We grew it just to be growing it and maybe get some to dry for decor. If the birds and critters leave us any for that.
We have a large patch of sweet corn for eating, so we’re still hoping for some delicious corn on the cob.
————— 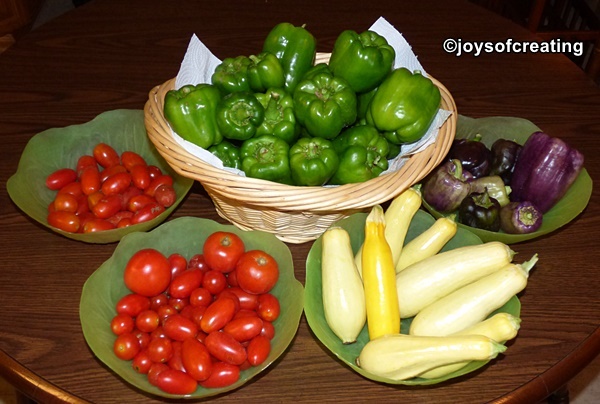 Here’s a photo of our bounty for the week. I’ve got a few last stragglers of squash. My squash didn’t do very well this year. We’re still getting a few tomatoes. We’ve been eating the tomatoes like candy. Yum! I’ve got oodles of peppers and I’ll be up to my elbows preparing and freezing them someday soon.

Next year we don’t plan to use the variety mix of color seeds. They were a disappointment. We plan on buying individual colors in plants or packs of seeds.
—————
And that’s all of my gardening updates at the moment.
I wish you all a nice relaxing weekend.

We got a super tasty surprise when we went to the garden: 9 Husky Girl Cherry Tomatoes and 1 pickling cucumber.
We’re amazed at how early this year we got our first tomatoes and cucumber.
I grow pickling cucumbers strictly to eat. I like their taste better than the salad cucumbers. My husband has some  burp-less cucumbers growing. I hope they have as good of a flavor as these little ones do.
We had a nice snack of these tasty fresh veggies. 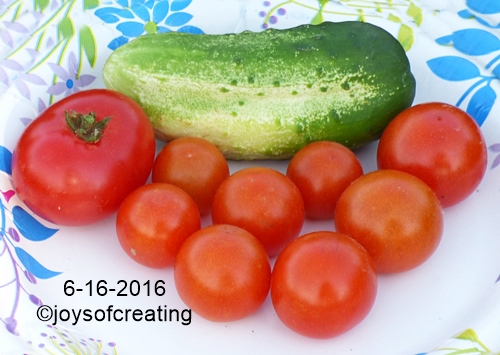 We have several baby asparagus beans. They’re long and scrawny and still growing. We hope they’ll fill out soon. It’ll be interesting to see how long they grow. We’re anxious to harvest a mess of them and see if they taste good. So far, the deer hasn’t bothered the asparagus beans nor the decorative corn. I hope our luck holds up with that.

Our regular bush green beans are trying to be productive, but as you can see in the photo, the deer have eaten the tops off of them. Hopefully, the beans that are growing on them now will get to mature and we’ll have at least one mess of regular green beans to cook.

The fan-fob is a bee-nursery again this year. Apparently only the lower fobs are in the right region of the universe for a nursery because the bees haven’t ever used the upper fobs.

Here’s our latest harvest of squash (and some of my herbs in the background) We’ve given away a lot of squash already. We like the sweeter taste of the yellow and golden squash better than the green squash.  I decided not to let my green egg squash plants continue to grow. I pulled them up and tossed them away. I’ve replanted a few more golden squash seeds and they’re already growing well. We won’t be hurting for squash. As you can see in the photo, we have more than plenty.

My husband got into the seed buying spirit and decided to try to grow some different things we’ve never grown before.
Burpee sent me a free pack of flower seeds with my squash seeds. Pretty neat!
Hopefully our garden will be full of tasty veggies & colorful Flowers.

Wishing you all a pleasant February
Filled with Sunshine and smiles!

We’ve had some gorgeous weather in between storms. The land is green and lush. It’ll be sad to see it going to sleep for the winter. Meanwhile, the view of our yard is lovely and refreshing to enjoy.

Our garden has just about fizzled out. It’s scraggly and long past it’s quaint look. We’re still getting a few veggies though. We’ve enjoyed our garden being small. It’s been easier to take care of and has been less stress to worry about. 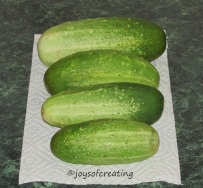 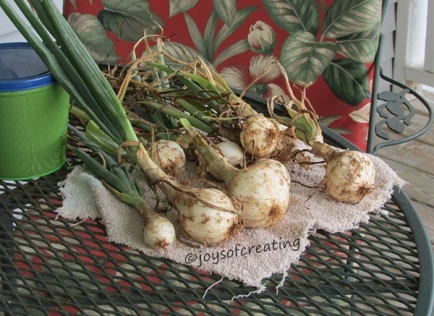 Since our garden was so small (and a buffet for deer and rabbits this year), I’m not going to be putting up much of anything in the freezer, except maybe a few peppers, onions and maybe squash.

Wishing you all a gorgeous week of mild weather.
Happy Gardening! 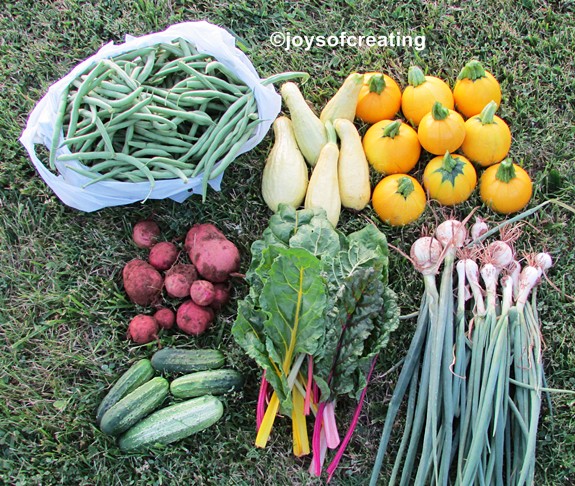 We got our first harvest of green beans yesterday. I can hardly wait to cook them. I’m going to put new potatoes and some herbs in with the beans and let them cook down. Yum! The rest of the beans will be snapped, blanched, vacuum packed and put in the freezer for winter.

We got our first harvest of cucumbers too.  They’ll be sliced and put in a bowl of icy water with just a sprinkle of lite salt.

A few more squash needed picking, so I picked them. We don’t really need them. I have a huge pile of squash on my counter right now. I’ll post a photo of them someday soon.

The leafy vegetable with the bright color leaf stems is Chard. It’s an interesting veggie. The stems has a celery-like taste to them and the green leafy part taste similar to spinach. This year is our first experience with it and we like it a lot.

I dug up a few potatoes to cook in with my beans.
I picked a few onions to have on hand for cooking or if my husband want to eat them raw.

Thankfully this update is a positive one.

I hope your gardening season is a productive one.

Here’s a few photos of our garden that show it’s progress.
Our crops are growing well (and so are the weeds. lol) 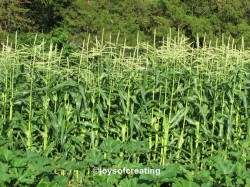 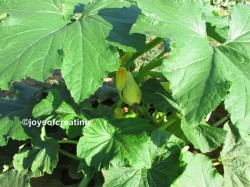 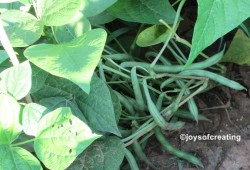 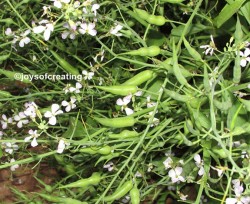 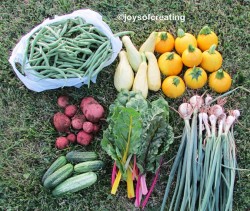