5-7-2017 Potato Experiment day 1
I found a couple of small potatoes in my potato bin that had sprouted a bit. I considered putting them in the edge of the woods for the critters. Since there were only 2, I decided to try something that I wanted to try for years; growing potato plants in a bucket.

According to what I’ve read, if you plant a potato in a container that you can add soil or straw around the plant as it grows taller, it might produce a bucket of potatoes. I’m using store bought garden soil because that’s what I have on hand.

These particular potatoes are regular yellow eating potatoes. I’m not sure how well they’ll grow in the buckets, but I think it may be interesting to try. (plus it’ll give me something else to blog about. 😉 )

I’m using a couple of old 5 gallon buckets that I used in years past as planters on the porch. They have holes in the bottom for drainage. I put about 5 inches of garden soil in the bottom.

I cut the part that sprouted off the potatoes.

I then placed the potato pieces in the soil.

I covered them with about an inch of soil. I gave each bucket about 4 cups of water. 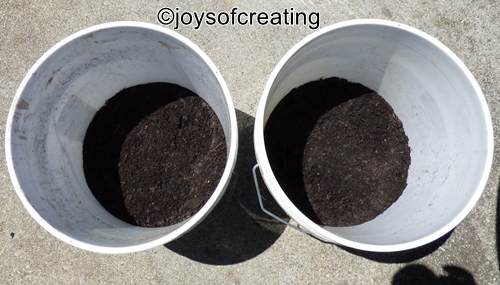 Now I wait.
I’ll post an update if a potato plant starts growing.

Have you ever grew potatoes by a method like this?
If so, did the potatoes grow and produce very well?

I hope you all have a lovely day!