I made some ‘Non-Edible Homemade Scented Bakeable Clay’ to make a table-setting. It was fun sculpting the pumpkins, acorns and pie. I used cookie cutters for the leaves, hearts & stars. It came together nicely. I use battery operated candles in it just to give it some character.

I made several tiny cookie cut outs of hearts and stars. I put them in a 1/2 pint canning jar with a tea light and made sort of rustic looking candles. For this craft, I used an actual wax tea light candle. 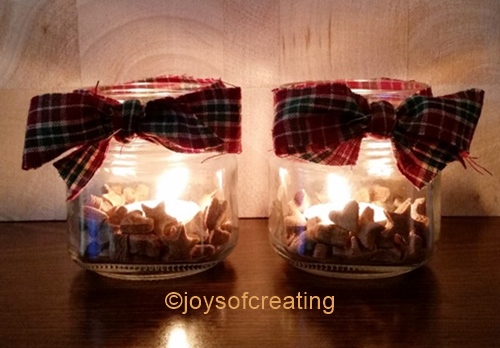 Then I thought I should make gingerbread type ornaments just out of tradition. I didn’t do too good of a job on their faces, but they serve the purpose and used up the last of my dough.

I made a short video showing the pieces I made setting together.

One of the most attractive aspects of bakeable homemade clay is that it’s a lot less expensive than commercial clays. I can ‘try to make’ bigger projects and if they don’t work out I can toss them without feeling too-bad for wasting money on clay.

One of the disadvantages to This bakeable homemade clay is that it ‘IS NOT WaterProof nor Moisture Resistant’. It Will Disintegrate if exposed to too much moisture or liquids.
You can paint and/or seal the sculpts with a finsh to help protect them some.
I’ve not painted nor sealed my sculpts, I like smelling them. I think sealing the sculpts with a finish or paint would block their aroma too much.

With all the salt and spices and considering how hard it is when it’s baked thoroughly, I consider this a ‘Non-Edible’ Homemade Bakeable Clay.

As for cleaning finished baked pieces, I suggest dusting with a feather duster or a soft cloth.

I use a basic bakeable recipe and add spices to it. It really makes my home smell like holiday baking. I used ground cinnamon and ground cloves, (but ginger, nutmeg, pumpkin spice or other spices could be used as well.)

I use ‘all purpose flour’ (it’s also referred to as plain flour). I use it to keep the clay from puffing too much and ruining the shape of my project. It seems a simple thing to say, but if you go in search of recipes for bakeable homemade clay many of the recipes will just call for ‘flour’ and not specify ‘plain’ or ‘all purpose’. It makes a huge difference in the outcome of your project.

I find there is some loss of detail in the baking process, so I try to make the details a bit deeper and more defined to allow for that. I don’t always get it right.

Here’s a link to the basic recipe I used:
http://www.ehow.com/how_8536912_make-bakeable-clay.html
I use ‘all purpose’ flour.
To that recipe I added:
3 tablespoons cinnamon
3 tablespoons of cloves.
I kept my dough in the refrigerator between projects.
**Because of all the spices and salt,
I consider this recipe a
‘Non-Edible Homemade Scented Bakeable Clay’

~*~
Wishing you all fun crafting.