The other day, I was watching an old black and white movie and a woman in the movie said that she had made ‘Chicken Cordon Bleu’.
I’d heard of cordon bleu entrées several times over the years, but usually in reference to a restaurant menu. I don’t know why it never occurred to me that it could be made at home. I wondered just how hard it would be to make.
I went surfing around and came upon a really good recipe and decided to give it a go. I’m surprised at how easy the ‘Homemade Chicken Cordon Bleu’ recipe is to make.

This is one of the few recipes that I made real close to the published recipe.
I used:
Panko bread crumbs
Deli Black Forest Ham
Swiss Cheese slices
I didn’t use toothpicks, the chicken stayed rolled up quite nicely without them.
I checked the internal temperature of the chicken and made sure it was over 165°. I’m real careful about that.

I served the Chicken Cordon Bleu with baked squash and a baked yukon gold potato.
It was a hearty meal and very tasty. My husband sure enjoyed it too. 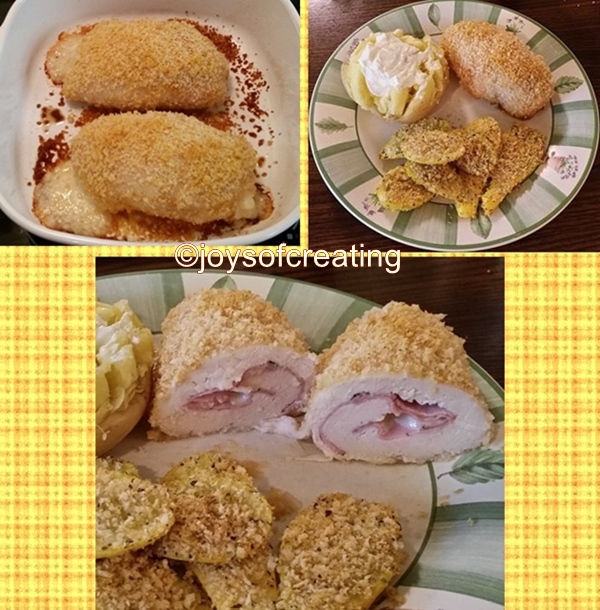 I condsider my attempt at making Chicken Cordon Bleu a success. I’m always happy to add another tasty recipe to our menu.

Have you tried any recipes that were inspired by a mention on a movie or tv show?
Was it a success?

Wishing you a successful rest of the week.

recipe can be found at:
Taste of Home – Homemade Chicken Cordon Bleu