My above photo is some of my left over yarn wrapped around clothespins. I did this to show that I think it’s a neat idea. This idea could be used for embroidery thread, yarn, ribbon, twine or most anything stringy to help keep them neat and tidy.
I searched and tried to find the original poster for this idea. Unfortunately that website is gone now, so here’s a link to the next to the oldest one I found: factorydirectcraft

My favorite stitch in loom knitting is the e-stitch or e-wrap stitch. It’s makes a rib type pattern and I like the look of the finished project.
The e-stitch is simple since it’s just wrapping the yarn around a peg. It can be used for cast on as well.

However, the most irritating and frustrating thing about using this simple stitch is if you let it loose for a nano second while wrapping the pegs , the yarn will spring to life and unravel like a joyous snake of rebellion.

I resolved the unraveling issue, sort of. After I wrap several pegs, I put a clothes pin on the yarn sort of between a couple of the wrapped pegs and then continue on wrapping. I move the clothes pin along as I get further around my loom.
If you use this method you may notice that the clothes pin overlaps the pegs on some looms.

This next tip comes from an idea sparked by my Bff. I complained about when I was looming, if I had to leave my loom to do something else like housework, when I’d come back to looming, I couldn’t remember if I was going left or right. I ripped out more than one project because of this memory lapse.
My Bff shared with me that she had resolved this issue by using a pencil gripper to set down on a peg a dozen or so ahead of the way she was going. That way whenever she sat down to loom again she knew which direction she was headed.
I didn’t have any pencil grips, but I did have other things that would work just as well.
*Use something that can’t be knocked off the loom peg: stitch marker, clothespin, safety-pin or a pencil gripper
Place it on a peg several pegs in front of the direction you are going in, move the clothes pin along as you go further around your loom.
If you use this method you may notice that the clothes pin overlaps the pegs on some looms. 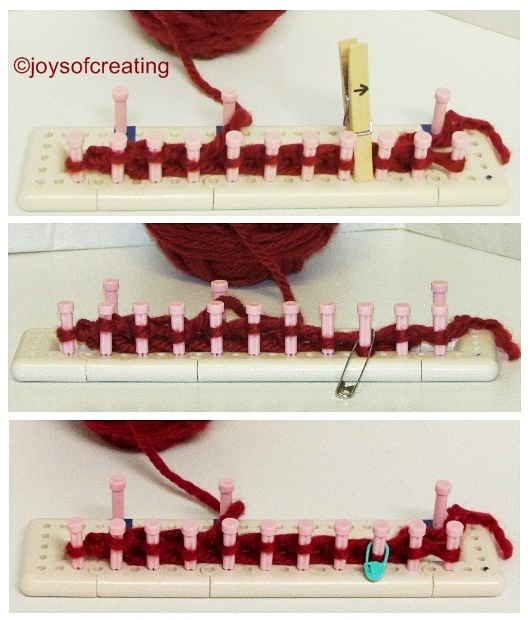 These are things that work for me, they may not be right for you, but I wanted to share them anyway.
I hope some of the tips maybe helpful in making your crafting adventures more enjoyable.

Wishing you all a sunshine filled week.
🙂

9 thoughts on “A few clothes-pin hints for yarn & looming”